I mentioned in yesterday's post about a series of gas explosions that occured while I was visiting family in the USA last year. In this post I will cover how this event that 'looked like armageddon' according to a fire chief.

As with most utilities, the gas network consists of headers or pipelines kept controlled at different pressures. To transport the gas over large distances, when there may be a high pressure drop, the pressure in the line is stored at a high pressure, in this case, just over 5.1 barg (75 psig). The final distribution to homes and businesses is done at a much lower pressure, around 0.035 barg (12 inches of water or about 0.5 psig).

Gas is let down from the high pressure system to the low pressure system through 14 valves or regulators. As a side note, this seems like a crazy high number to me. I am not sure why they have so many. The only thing I can think of is that it is to account for a large variation in demand between summer and winter but even then this is still a large number of valves. Perhaps it is a historical legacy, valves have been added to cope with larger demands as the towns have grown.

Below is a rough sketch of the setup. This is based on my own understanding of the system as it has been described in news reports and the preliminary investigation by the NTSB. I have not yet seen any diagrams by the investigators, so this is entirely from the text descriptions (and even they are pretty limited). 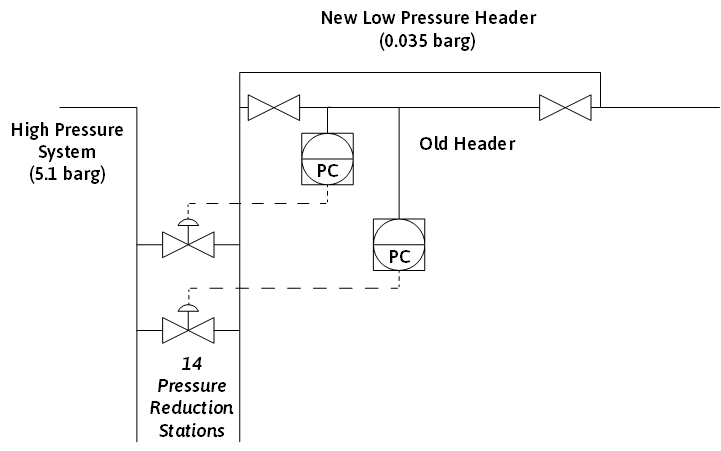 I don't know what pressure the low pressure main actually got up to, I haven't seen it reported anywhere and I am not sure if it was actually measured anywhere apart from the abandoned line. But it was certainly much higher than it was supposed to and overpressured joints and equipment in many houses and business.

This resulted in one person getting killed and 30,000 forced people were to evacuate their homes. Gas supplies were disrupted for months while everything had to get inspected, and pipelines & equipment had to get replaced before the gas could get restored.

I would love to know what you think. To comment on this article, send me an email