It seems to be a common feature of financial blogs to review their spending at regular intervals1 usually monthly or quarterly. I am not about to try and become a financial blogger, offering saving and investment advice, but I do think it is worth keeping an eye on our spending. Rather than a high frequency, I will take a longer term view and look at spending over the whole year, that way seasonal spending is excluded.

I don't intend to cover all of my spending, but will include the usual big three (housing, transport & food) as well as the childcare (and you can see why later).

Ideally I would compare last year's spending with the prior one. Unfortunately the method I use to record my spending was only implemented at the end of last year and so I only have accurate data for the last four months of 2018. As a result lots of the categories include a best guess based on the results I do have. These categories will be marked with an asterisk. I have rounded all numbers to the nearest £100 to both simplify the page and to account for the fact that these numbers are estimates and there are significant errors in them.

This is usually people's biggest expense, however in my case, it is actually quite low. I do not consider mortgage payments as a cost, but I categorise it as an investment because I could get that money back (plus or minus appreciation) and I consider the investment to include avoiding paying future rent. Of course the mortgage isn't fre, so I do include the cost of interest as part of my housing expenses, though this is relatively low.

The final section, "general house", includes trips to IKEA, garden centres and electronics like the replacement TV. Unfortunately this section uses data from my credit card spending and I only have four months of the end of 2018. I have had to assume my spending was constant throughout the year to get an annual cost. This will have introduced a significant error.

While the rounded figures look flat, the detailed numbers show a very slight decrease. Considering the uncertainty of the 'general' number it may have actually increased.

I have always considered utilities to be a separate category from housing, though I understand some people include them together. I can be fairly confident about how much I have spend over both years and the costs have gone up but not significantly.

When combining the housing and utilities figures, the the cost been the same between the two years (within the margin of error).

The next big item to consider is transport costs. In our family, we have one car and lots of bikes. We aim to use the bikes when possible I've other forms of transport.

I commute by bike or car and my wife commutes by bike and train. The biggest difference between 2018 and 2019 was the large increase in train commuting costs. This is entirely down to my wife returning to work after maternity leave and so only had three months of commuting in 2018.

The car includes a depreciation line. Ideally when considering depreciation, you would project how long you expect the equipment to last and depreciate it over that length of time. I don't know how long the car will last, so I just use the time that we have had it already. As a result, every year, the previous year's costs will decrease!

Fuel, bike maintenance and public transport costs all require credit card statements and similar to the 'general' housing statement, have been estimated on the data I do have.

Both categories here are based of the credit card statements and so are subject error in 2018. I am glad to see that the costs have reduced, though again, this could be caused by the error of the measurement.

It is interesting that we are spending significantly more on food than either the housing or transport. If there was an area to optimise on, this would probably be it.

Finally, I thought it would be worth including our biggest cost.

Just like the commuting cost, this has increased significantly, though it is entirely down to my wife returning to work. 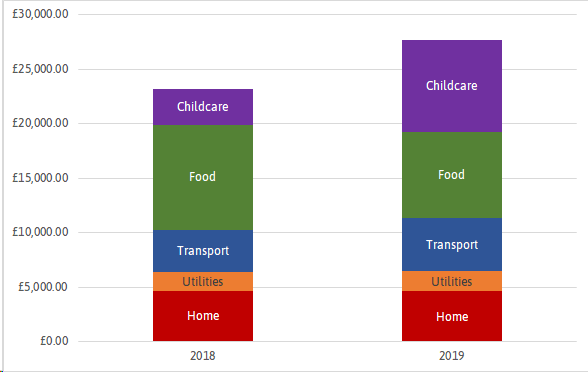 Please remember that this is not our total spending, just the major categories. I am slightly amused that the usual big 3 categories are just about reversed in our case.

I am looking forward to the kids being in school so we can eliminate our real biggest category!

I would love to know what you think. To comment on this article, send me an email